For almost seven hundred years, Krakow was home to a large Jewish community. This was all but extinguished during the war, yet the echoes of this world can still be felt across the city.

After a long period of post-war inertia, colour is returning to the districts that Jewish families once knew so well. Splendid synagogues are again functioning as places of worship, and vibrant museums have opened in tribute to the lost world. Jewish klezmer music, reborn with a contemporary twist, echoes from the cellars of Kazimierz, the ancient heart of Jewish Krakow, drawing a host of young Polish and international fans.

On this walk we will explore the streets of Kazimierz, stopping at synagogues, market squares and beautiful old graveyards, (the magical Remuh cemetery is the best-surviving Renaissance Jewish graveyard in Europe). It is likely that there will be interesting one-off exhibitions on in the district, and we can have a look at the best of the shows that are being held.

There is also the possibility to cross the river and explore Podgorze (a short walk from Kazimierz). This area, once a prosperous mercantile district, became Krakow’s Jewish ghetto during the war. Fragments of the old wall still survive as a chilling reminder of a past that is really not that long ago at all. Whilst a few Jews managed to escape from the ghetto (Roman Polanski is a well known example) most were transported from here to the death camps.

We will end the walk back in Kazimierz, which today is enjoying a far-reaching renaissance.

What’s included in the price?

PAOLA POLIGNANO 23rd Oct 2019
our guide was so nice and learned about Krakow and Polish history. She guided us with competence and passion through a neighbourhood so full of history and traditions, old and new. Higly recommended.
Jean Helsby 2nd Oct 2019
Perfect. Our guide Barbara was very friendly and very informative. A great way to start our first visit to Kraków.
Paul Mason
Mateusz met us on schedule at the hotel. He was very personable, with a good command of English. Just enough time at many venues to whet our appetite for returning again for greater detail.
Simon Putt
Very good indeed...just what I wanted. Our guide was extremely knowledgeable across history, culture, politics, economics. She was punctual, professional and courteous. It was an excellent tour of Krakow's old town.
Doug Davidson
Barbara was great
Kay Johnson
It was just exactly what I wanted and expected.
Thomas Köhler
Anna was a lovely person and her tour was very good, well planned.
Guest
We covered the areas of interest to us. Our guide knows the city and told us may interesting stories.
Val Williams
Monique was very knowledgable and informative. Excellent walking tour.
P. Veitch
Monika fatastic young lady. Well mannered and knowledgable. Also had a good way with her and a sharp sense of humour. Great tour.Many thanks Monika..
Show more reviews
225 PLN
per person
Booking form
Other Walking Tours: 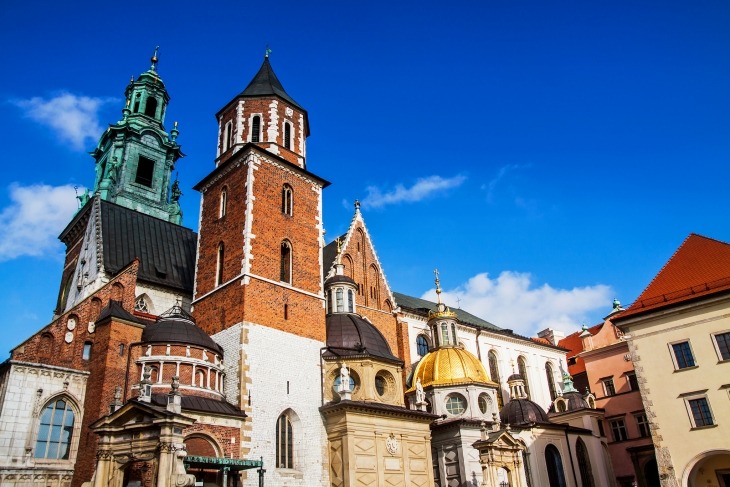 See the city with an english speaking guided tour